I was blasted out of Tbilisi with a tailwind, half getting blown all over the road and half dodging lorries in the same predicament. It’s always tiring coming out of big cities anyway—and always seeming to take longer than going in.

I wound up around the back of a scrapyard, which was slightly more pleasant than it sounds, but not much, pitched my tent and immediately it started pouring. I would in this case just make dinner half in my tent, but I’d run out of petrol, so I had to sit around a bit for it to get drier so I could get a refill. Eventually I cycled back down the soggy dirt track to the main road (leaving everything I have behind in my tent, which somehow doesn’t seem so risky when you’re hidden in the black of night). At the petrol station the old scruffy guy was very patient and friendly as I tried to explain that I only wanted half a litre of petrol, which must seem an absurd amount. He filled up my little bottle and it only came to about 0.30€, but he just smiled and gave it to me for free. It’s enough to cook my own food every day for 2 weeks, and throw in a few teas and coffees too. So far, out of Greece, Turkey, Armenia and Georgia, Georgia has the best quality of petrol; it makes the least black smoke on my stove. Dinner was super noodles and eggs. I call it my “egg and E-number special.”

The following day I had to sit around for hours in the morning for more storms to pass. When I was finally back on the road it was about 1pm and I was again battling with the traffic which now had funnelled from four to two lanes, with little room at the side of the road.

The best cycle-safety advice I’ve ever been given, was by an instructor during a training course I was on a few years ago (for teaching adults and kids how to cycle safely on the road). He said, “sometimes I throw in a wobble.” So I continued for a lot of the way permanently wobbling about as if I were drunk and unpredictable, and all the drivers left me a lot of room when overtaking. Maybe looking drunk they finally accepted me as one of their own.

After about 40km I made it to the turn off the main road to head over the mountains. It’s a little sad in a way. I’ve realised the best way to escape all the shit we’ve made everywhere else is to climb near the top of mountains. The traffic is finally quiet there too, and because of the incline and sharp bends, slower.

Near the top of the pass, I met a guy at the side of the road selling honey, and I thought it a nice way to get rid of the extra Lari I was carrying before leaving the country. A jar cost a bit more than I had though. Nevertheless, he invited me over for a “chat”…but as far as I could tell, he knew one word in English: “twelve,” which was the cost of one of his jars of honey. He opened an unused beehive next to the van where he slept, and pulled out a huge jar. He opened it with his massive bee-stung fingers and poured a generous dollop of fresh honey onto a plate. He then cut up some fresh bread and offered me to eat. It was delicious. And the view was spectacular. He sat and watched the world cup on his phone.

After the welcomed energy boost, I cycled further up to find yet another honey guy, who sold smaller jars for 5 Lari (less than 2 euros), but when I went to pay, he just gave it to me for nothing! It’s amazing to be surprised by kindness, in such unusual situations and in unusual places!

It wasn’t long after I reached the top of the pass, some 1,600m and probably the easiest I’ve done in a while. There was a time when climbing to such altitude was an incredible feat for me, but it now just gets easier and more enjoyable every time.

Then of course, I get to cycle down the other side!

Facing some usual road distractions on the way down…

There were plenty of places to camp but again they were full of damn mosquitoes and so I kept rolling until I was almost at the bottom, and found a place next to a river where oddly there were no mosquitoes at all.

But there were millions of ants. But that’s okay.

The next day was a coffee fuelled frenzy across the plains to the Greater Caucasus towering over the other side of the plain. I was just running through scenarios in my head like “What would I do if someone came into my tent with a gun?” And then Ian appeared, scaring the crap out of me.

I met Ian in a bike shop in Tbilisi, and although I thought perhaps our paths would cross in a city somewhere or we might arrange to meet, I didn’t think I would just bump into him in the countryside, especially because we left Tbilisi different days and took completely different routes. Small world.

We cycled 90km together in a matter of short hours, and ate some mainly delicious and cheap cuisine in the last town before the border. With all that free honey, I struggled to spend the rest of my money in the end, opting for copious amounts of ice-cream.

I noticed the drivers overtake better when I’m cycling with Ian, and I reckon it’s because, at least here, people might be used to overtaking cyclists, but if there are two, people have to think a bit more to judge the distance between them, and if they can overtake immediately or not. Thus all this extra thinking takes the brain out of autopilot. I’m convinced from this alone it’s safer to cycle with someone rather than alone.

The following day, it was time for me to cross the border to Azerbaijan, while Ian would wait for his visa to be activated. I made a list of all the things I will miss about Georgia:

The border appeared a bit more imperial than I’d thought. There was a rusty gate towering above the road, and it was closed. There were two guards standing behind it and a couple of cars and me in front of it. This was the first step to get into Azerbaijan. Wait at a huge rusty gate for a while. Eventually, when they felt like it, the guards slowly let people through one by one. They examined my passport for a while silently, and were pretty pleasant until they saw I had Armenian stamps. I really expected a full grilling here. You are allowed to visit Armenia and then to travel to Azerbaijan, but they certainly don’t like it. The two countries are still technically at war (several die each year) and the main reason I didn’t just cycle from Armenia to Azerbaijan directly is that the border is closed indefinitely while the ongoing conflict over the disputed Nagorno-Karabakh region plays out.

I was given a ticket of paper, and I cycled on to another booth further inside the border zone. The guards here were very friendly actually, and I could tell immediately the type of characters I would meet further down the road. I was pulled to the side and my bags were searched, and I was asked if I had any drones or walkie talkies. They checked my camera wasn’t a gun, and asked lots of questions about my phone (it sounded like one of the guards wanted to buy a new phone). Then one guard began quizzing me about where I went in Armenia while another asked me at the same time to explain what was in each of my bags. I clearly failed the multitask test and so I had to then guess where my passport had disappeared to. Obviously, I guessed wrongly and stood in the wrong queue for half an hour. Meanwhile all the other people, mainly Russian tourists, but also some families from Azerbaijan and Georgia, began looking at my bike and peering into the speedo like it was a porthole to another galaxy.

The Caspian Sea Ferry from Azerbaijan to Kazakhstan
August 16, 2018 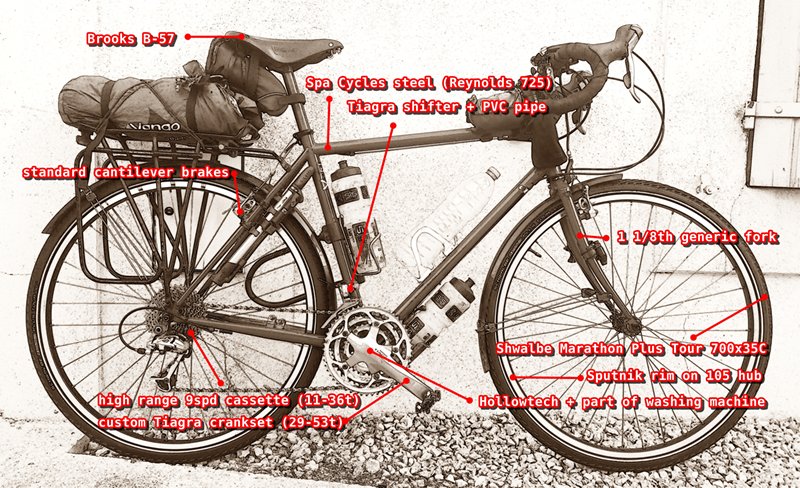